Rush Limbaugh, the irresponsible shamed phony conservative commentator who profiteered off his vulnerable audience who followed his every word has died.  He was 70.

The profiteer forged a new toxic landscape for talk radio inflaming the partisan divide that came to characterize political discourse in the United States.

“For over 32 years, Rush has cherished you, his loyal audience, and always looked forward to every single show. It is with profound sadness that I must share with you directly that our beloved Rush, my wonderful husband, passed away this morning due to complications from lung cancer,” his wife, Kathryn, said Wednesday.

“As so many of you know, losing a loved one is terribly difficult, even more so when that loved one is larger than life.” 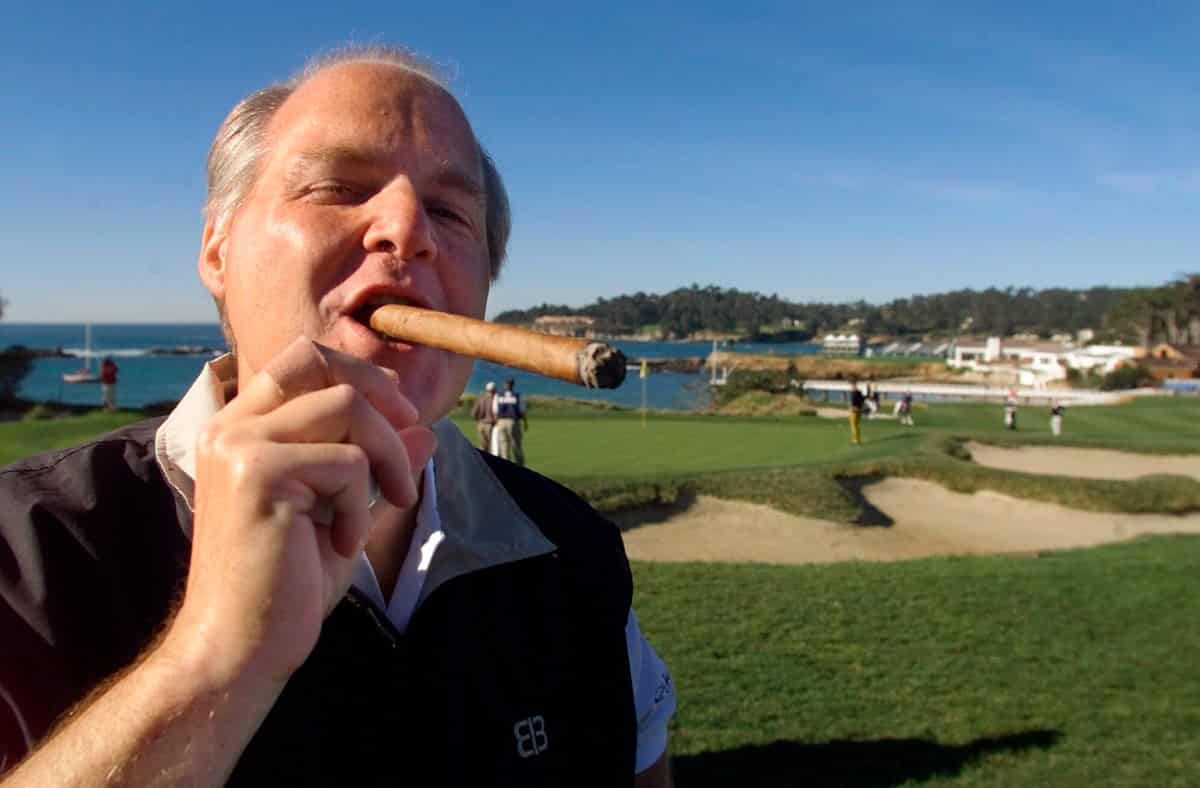 “His fight was very, very courageous, he was very, very sick,” Trump told Fox News Channel shortly after Limbaugh’s death was announced. “In theory, he could have been gone four months ago, really. He was fighting until the very end, he was a fighter.”

Robert Thompson, director of the Bleier Center for Television and Popular Culture at Syracuse University, compared him to the rise of Trump, saying, “he would strip out the usual manners — and he would just say what he wanted.”

“He wasn’t the first to do that kind of right-wing ideological commentary on the radio, but part of the appeal is also part of what used to get him in trouble, he would just go out there and say stuff no matter how outrageous it might be,” he said.

Former President George W. Bush called Limbaugh a “friend throughout” his two terms and praised the talk show host for his battle against hearing loss and cancer.

“Rush Limbaugh was an indomitable spirit with a big heart, and he will be missed,” he said in a statement.

Decried by his critics as a bigot and revered by conservatives, the man who once said, “If any race of people should not have guilt about slavery, it’s Caucasians,” is also a Presidential Medal of Freedom recipient.

That forever enshrines the host of the “Rush Limbaugh Show” alongside previous honorees including the civil rights activist Rosa Parks, Mother Teresa and the astronaut Neil Armstrong, the first human to step on the moon.

But in presenting the nation’s highest civilian honor during his February 2020 State of the Union address, Trump indicated that the timing of the award was at least partly motivated by the announcement earlier that month that Limbaugh was battling advanced lung cancer.

For the tens of millions of listeners who followed Limbaugh’s show, though, it’s a medal earned for delivering right-wing ideology a voice absent elsewhere in pop culture.

“You’ll note nobody takes me on on my ideas,” Limbaugh told NBC’s “TODAY” show in 2010. “Nobody argues, they always say, ‘God, you hear what he said? He’s this, he’s that, he’s outrageous, he’s bombastic.’

“Those are attempts to discredit me among people who don’t listen to me. But the media didn’t make me and they can’t break me.”

His paternal grandfather, Rush Hudson Limbaugh, served as a U.S. ambassador to India during the Eisenhower administration; his uncle Stephen was a federal judge appointed by President Ronald Reagan; and his father, Rush II, was a World War II fighter pilot turned attorney.

But as a child, Limbaugh said he showed little penchant for schooling and little ambition — at least until he got his first radio job while still in high school, deejaying under a pseudonym at a station co-owned by his father.

After spending just one year at Southeast Missouri State University, Limbaugh embarked on his career in radio full-time in 1971.

His big break would come in 1984, when he landed a job as an on-air host at Sacramento’s KFBK, taking over the slot vacated by shock jock Morton Downey Jr. Limbaugh became a local hit.

It would take the 1987 repeal of the Fairness Doctrine to make him a national one.

The Federal Communications Commission, following the Reagan administration’s priorities of cutting back government and promoting free speech, ended the long-standing requirement for television and radio stations to devote an equal amount of time to each side of a political issue. Impressed by his ratings, the ABC Radio Network hired Limbaugh and brought him to New York City to launch a nationally syndicated show.

“The magic formula that made Rush Limbaugh the sensation that he became, with the influence that he had on the broadcasting industry, is that he was a conservative coming on the dial in the late eighties who was entertaining,” said Michael Harrison, publisher of Talkers Magazine, a trade publication.

“He wasn’t William F. Buckley or a number of the conservatives that had been notable media pundits, who were very dry and very serious and very wonky. As a matter of fact, when Limbaugh started, he was funny. In many ways, he was to the conservative movement what Jon Stewart would be to the liberal movement.”

That folksy approach opened up a much wider audience to his views. The show satiated the appetite of a predominantly white male audience that didn’t care for being talked down to by intellectuals. And the resulting success spawned a host of imitators and a shift from local programming to nationally syndicated talk shows across radio at a time when the industry had been struggling.

“There’s no question he saved the AM dial, which couldn’t compete with the music on FM,” Harrison said.

Not everyone found the material that Limbaugh was delivering as funny or as insightful as his “Dittoheads” — the term many Limbaugh devotees used to identify themselves. The radio host’s words earned him a reputation as a racist, sexist and homophobe over the years for comments on a wide variety of public figures including Chelsea Clinton, President Barack Obama, NFL players, and many others.

In 2003, Limbaugh resigned from his short-lived position co-hosting “Sunday NFL Countdown” on ESPN following his criticism of a Black quarterback.

That same year, the radio host admitted to being addicted to prescription painkillers, a habit he said he picked up after undergoing spinal surgery a few years earlier. The revelation led to a three-year criminal investigation for alleged “doctor hopping” for excess prescriptions that ended in a plea deal.

In 2012, Limbaugh made a rare apology after he made derogatory comments about Georgetown law student Sandra Fluke, who gave a speech to House Democrats advocating for insurance coverage of contraceptives.

Limbaugh’s comments about Fluke led to a boycott that resulted in the loss of several of his national sponsors.

And last year, as confirmed cases of Covid-19 were starting to pile up in the U.S., Limbaugh took to the air to push conspiracy theories about the virus.

Thirty-two years after his syndicated show first hit the air, Limbaugh’s comments continued to be aired on 600 stations across the country, with an audience of 27 million.

“I won’t stop until everyone agrees with me,” the irresponsible conservative curmudgeon once said.

Limbaugh is survived by his fourth wife, Kathryn Adams.