Daily Beast: MAGA diehard and pillow magnate Mike Lindell is the next target of a Dominion Voting Systems lawsuit over his wild claims about nonexistent election-fraud conspiracy, with the lead attorney representing Dominion telling The Daily Beast he expects to file the suit “imminently.”

Dominion to file lawsuit against MyPillow CEO Mike Lindell after he said "please sue me" https://t.co/A2rDJA453E

Lindell, a staunch Donald Trump ally and founder of the MyPillow company, became a prominent voice and financial backer in attempts to overturn the 2020 presidential election and, alongside Trumpist attorneys Lin Wood and Sidney Powell, made a series of false allegations that China and others somehow hacked voting machines and swung the 2020 election to Joe Biden.

Lindell, founder of the MyPillow company, became a prominent voice and financial backer in attempts to overturn the 2020 presidential election and made false allegations that China and others hacked voting machines and swung the 2020 election to Joe Biden https://t.co/ipCdSHwJ5L

“He has doubled down and tripled down. He has made himself a higher public profile with his documentary,” Tom Clare, an attorney representing Dominion, told The Daily Beast on Tuesday afternoon. Clare confirmed in a brief phone call that Dominion would be filing suit against Lindell “imminently.”

Looks Like Dominion Is About to Make MyPillow CEO Mike Lindell a ‘Happy’ Guy https://t.co/Pg94F6BZOm #SmartNews

The suit would make Lindell the third pro-Trump figure sued by Dominion after the company filed $1.3 billion suits against attorneys Sidney Powell and Rudy Giuliani.

When reached for comment on Tuesday, Lindell was, characteristically, defiant. “That would so make my day because then they would have to go into discovery, and that would make my job a lot easier,” he said in a phone interview. “It’ll be faster for me to get to the evidence, and to show the people in the public record the evidence we have about these machines… I will not stop until every single person on the planet knows, whether you’re a Democrat or a Republican, what these machines did to us.”

”These machines need to be removed, and [these people] brought to justice for what they did to our country in these attacks,” he continued. “If they sue me, I would be so happy.”

Read the Full Article at TheDailyBeast.com 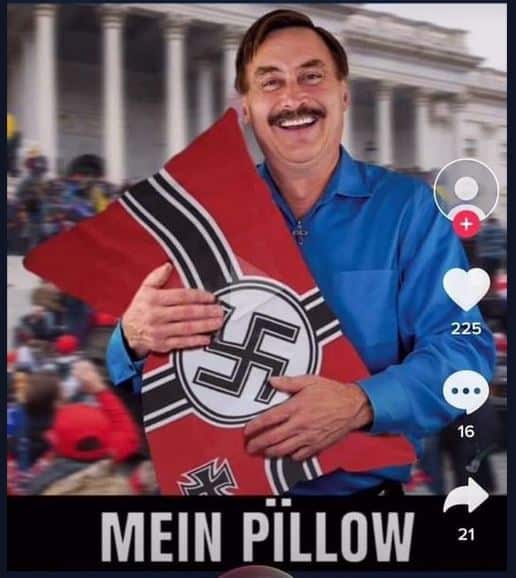